Permanent exhibition in THE MUSEUM OF LOCAL HISTORY  |  0+

Five halls of semi-basement are occupied by a permanent exhibition «Ancient Siberia» which recreates the households and religion of the native peoples of Siberia: nomadic herders in southern Siberia, farmers in the valleys of the Ob and Yenisey rivers, hunters and fishermen in the taiga zones, reindeer herders in the Far North. The development of these cultures is represented in the halls — from the Paleolithic to the ethnographic present.

In the «Hunters and Fishermen» hall (III millennium BC — beginning of the XX century) one can see weapon, traps, ammunition and hunting objects, items related to gathering and fishing, craft tools for wood, bone, birch bark. Spiritual culture is shown by complexes of ancient beliefs and sacred objects.

Exposition of the «Farmers and Herders» hall (II millennium BC — XX century) includes agricultural tools, items for bronze foundry and pottery production, weaving, jewelry and women’s clothing. Such traditional beliefs as shamanism and cult of the Sun are presented.

Among the exhibits of the «Nomadic Herders» hall (IV century BC — XX century) are armament and ammunition, men’s and women’s clothing, interior items of the yurt, nomads' kitchen, household and ritual dishes, burial place with a horse.

The exposition «Reindeer Herders» (XIX — XX centuries) represents clothes and jewelry of the Nenets, Nganasans and Evenks. A separate complex is dedicated to the draft and mount reindeer breeding. There are also exhibits from the museum’s extensive shaman collection. 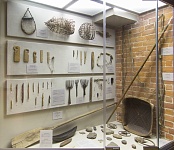 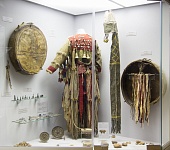